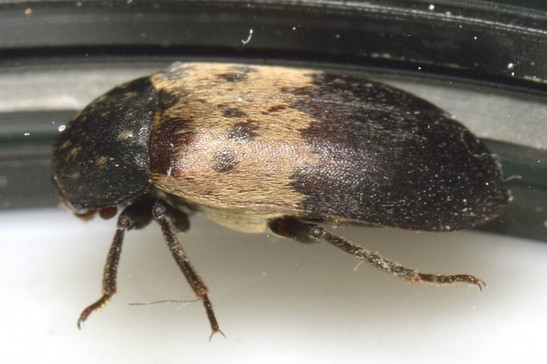 Do you think you have a Dermestes Beetle problem in your premises?

The following are the most common Dermestes beetle found in Fife.

Larvae of the Dermestes beetle feed on dead or dried up animal material including dead bodies, dried meat, fish and body parts like hair, skin, bone and feathers.

Although quite common in Fife and the surrounding areas they are thought to originally come from Eurasia, although the Black Larder Beetle came from the north of America.

They tend to pop up in museums where they will feed on stuffed animals and dried insect specimens.

Museums can also use the Hide Beetle to help with cleaning tissue from skeletons, some species can also be used for Forensic entomology when studying human corpses.

When Larder Beetles are found in food storage areas like warehouses and grain stores, it is more likely that they are feeding on other dead insects.

Sightings in kitchens are normally down to poor hygiene allowing them to feed on discarded food stuffs collecting under units and shelves.

The adult beetle will fly and are attracted at night to illuminated shops like supermarkets so when doors and windows are partially open the invite for infestation is there.

The varied carpet beetle larvae are known as “woolly bears” this small round beetle of only 3mm in length is a serious textile pest. It looks like a cream and brown lady bird under a microscope but can be dealt with in a similar manner to the other Dermestes Beetles.

At Elysium we have highly trained staff qualified to deal with Pest Control Management and can deal with beetle issues in your property.